Looking at my blog traffic statistics, I see that many of my visitors came via Ravelry.  Unfortunately, I don't agree with Ravelry's recent decision to stereotype a group of American people.  I find their decision hypocritical and bigoted.  Consequently I have made the decision to not participate in a community that bans someone for their personal beliefs.  The clincher was the word 'yet'.  Their public statement said they are not yet banning conservatives.  That tells me they are considering it in the future.  So if you are not an animal like them, you are not equal.

As a result of my decision, I will likely not have as many people visit.  But that is OK.  This blog is for me anyway.  All visitors are welcomed.   Also, none of the links to my old Ravelry project pages will no longer work.  Sorry about that.  If you have a question about one of the projects, just post a comment and I'll reply when I can.

I am participating in the Papillon KAL at my LYS.  I have the first section finished.  The pattern is challenging.  It is certainly not TV knitting. 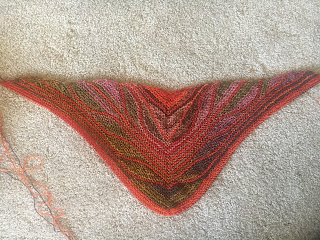 I'm not sure I'm happy with my color choices.  It is pretty, but it is outside my typical color palette.  I'm trying not to pass judgment until it is finished.

I also have my Rhinebeck sweater started.  It is Hamilton by Josee Paquin.  I am using KnitPicks Wool of the Andes Tweed in Papaya.  It is an easy knit so far. 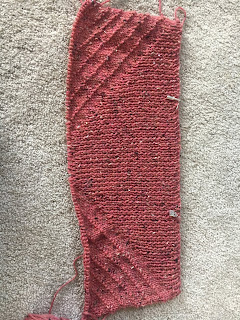 The pattern is allowing me to use some of the fun stitch markers I bought last year at Stitches Midwest. 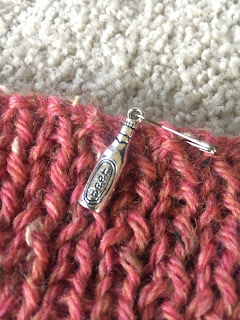 In a note about stitch markers, I found with Papillon that simple, round stitch markers worked best.  I first used some of my fun ones, but with the frequent turning of the row due to the short rows, they got tangled in my yarn too much.  I then switched to just the removable safety pin style.  Those also didn't work as smoothly as I liked.  The narrow end also tangled with the yarn.  That's when I switched to the simple circular markers. 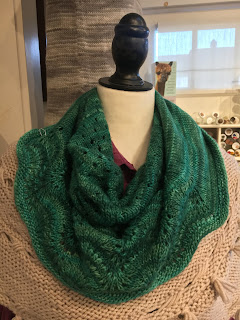 I Haven't Floated Away

It has been over a month since I last blogged.  I never mean to go that long between visits.  I guess I've been busy.  Or lazy.  The non-stop rain we've been having this year is certainly taking its toll on me.  I have no energy.  It feels like winter.  From a temperature perspective, I'm loving it.  We've been able to have the windows open when it's not raining.  Today is predicted to be a dry day.  I'll try to fit in a walk after I'm done with my tea.

Since my last installment, Ed, Trisha and I traveled up to Ann Arbor to visit Kristin and have her clean our teeth.  During my appointment I learned I have an extra tooth in my lower left jaw between the premolar and first molar.  This tooth is small and not fully formed.  This is funny to me because I have another tooth anomoly, which I've known about.  My upper right permanent incisor never formed.  The permanent canine grew into its spot and the baby tooth canine is still in my mouth.  This is all genetic because my mom had similar issues.

After travelling to Ann Arbor, we spent a quiet weekend at home over Memorial Day.   Sunday was Ed's birthday.  Squeaks loved playing in the gift bag, especially with the curly ribbons. 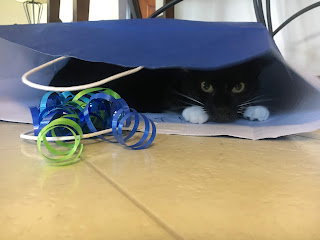 I finished my green basic socks.  This was a long, drawn-out project for me.  They've been washed, blocked and added to my stockpile for cooler weather. 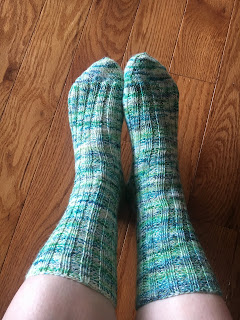 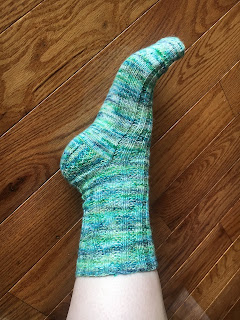 My next sock project is another basic sock using the Uneek self-striping sock yarn I bought on LYS Day.  I'm using the Flexi-flip needles I got in Pittsburgh.  At first these needles were a little difficult to work with, that is until I noticed that one end was pointier than the other.  Now that I have them figured out, I'm flying along.  I'm getting close to the heal.  I might do an afterthought heal.  I'll have to find a pattern to study to see if it would work. 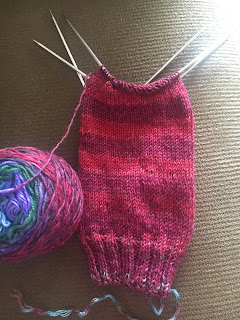 As I mentioned earlier, we've had a lot of rain.  It's been damp and dreary most of the time.  But there has been rare occasions when the clouds break at the end of the day and we get a beautiful sunset. 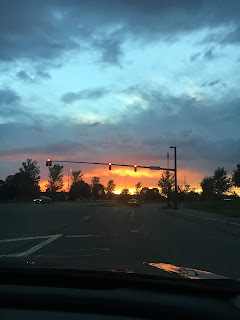 The May installment of the Jimmy Bean's Sunshower Shawl came.  I promptly knit it. Having small monthly assignments are easy to do.  I'm considering scheduling my knitting this way so that I get things done in a reasonable timeframe. 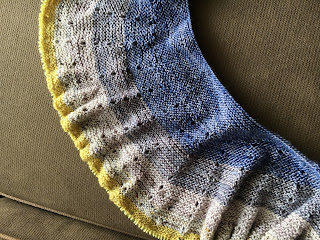 My favorite LYS had a little contest recently.  If you purchased a skein of Manos del Uraguay Clara or Gloria to make a one-skein item and returned it to the shop by June 15, your item would be displayed to be voted on by shop patrons.  I decided to make a cowl, but one of my own design.

I began making a half circle, knitting flat until it reached about 24 inches across the top. 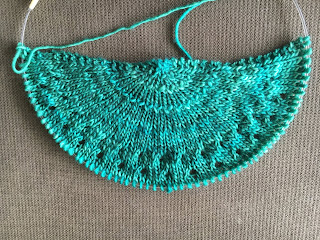 Squeaks helped by inspecting the yarn. 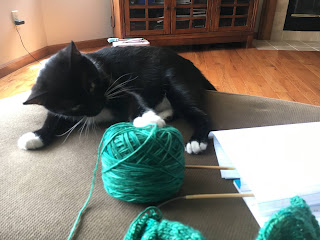 After I joined in the round, I changed the stitch pattern and flared the end so that it would wrap around the shoulders. 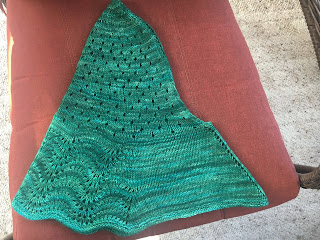 I am calling this pattern Marycrest, in honor of the street where I grew up.  If I get it written up, I may submit it to Ravelry.

The LYS also has a knit-along going for one of the patterns it featured on LYS Day:  Papillon.  I decided to join them the first night because the pattern was confusing.  Now that it has been explained, I'm moving along with it. 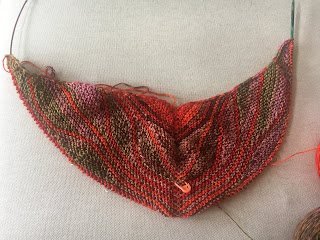 I'm not completely sure I'm happy with the colors I picked.  This is also Uneek yarn.  Don't get me wrong.  The skeins were beautiful.  I'm just not sure they are working together as I had hoped.  The picture above is a bit over-exposed but it does show that there isn't as much contrast as I had wanted.  I think I should have either done a black instead of the orange, or had picked a multi-colored skein that was more opposite the orange.  I'm trying not to pass judgment too much until I get it done.

It has been 3 months since we adopted Squeaks.  She's adapted very well.  Her favorite activities include spending time in the sunroom watching birds, 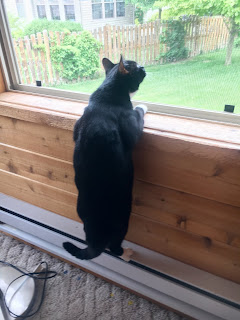 sleeping in the sunshine, 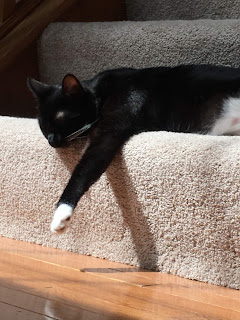 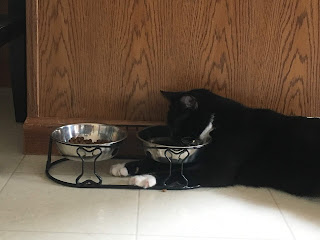 and playing with my yarn.   This is the guilty scene I awoke to this morning.  The skein she chose to destroy was the yarn I used to make her cat toy.  The toy has disappeared.  She must be trying to tell me to make another.  If I can get it untangled, I'll knit one for her. 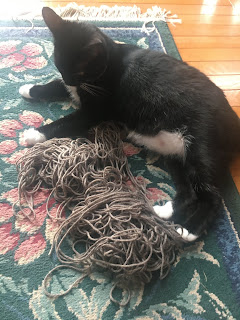 It looks like the sun is trying to come out now.  I think I'll change clothes and go for a walk.  I need some vitamin D.

Kathy S
Mom of 3/wife of 1/software engineer trying to find enough time for herself to keep her sanity intact. 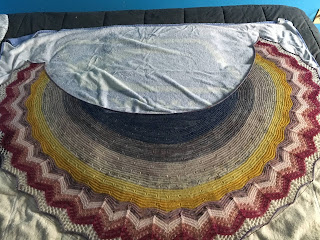